This CT DOT project is the construction of a new Rotary. The Seymour Rotary reconstruction was rather unique, in so far as form as well as function played a major role during the design and construction of the project.  There were improvements to the drainage system, sight lighting and traffic flow.  The required safety upgrades allowed for the decorative use of granite curbing, as well as Colored and stamped concrete.  Granite curbing, by its reveal and orientation, was employed to help guide and direct traffic, yet allowing over runs for larger commercial vehicles Areas of the colored stamped concrete also served as an over run apron for truck traffic within the center ring of the rotary.  During all phases of construction, live traffic was maintained.  The most difficult challenge was to develop a paving sequence for the final overlay that allowed traffic to be maintained within the project limits, thus removing a lengthy detour from consideration.

We are a site trade subcontractor on an 8-acre site for a four story Courthouse and two story parking garage. Development of site included the removal of 7+ thousand cube yards of bed rock and 30 thousand cube yards over all.  Most of the onsite spoils were reclaimed for reuse upon the project.  Well points were drilled for dewatering, and filtration and treatment gear was installed to treat possible contaminated ground water.    A unique rock socket soldier pile shoring system was employed to save space and time.  We installed a complete storm sewer for the site, as well as all of the building utility connections, excavated,  prepped and backfilled for all concrete foundations, installed a pump station, concrete/granite curbing and site paving.  The challenge was to work the entire site while allowing onsite storage as well as onsite parking for all of the trade personnel.

Guerrera was very proud to be a part of the reconstruction of Rochford Fields and Villano Park in Hamden, Connecticut.  This was a $10 million dollar high profile project for the Town of Hamden and involved the CT DEEP due to existing contaminated soils on the property.  The project was completed in 10 months.  We removed all existing structures on the parks, installed 5 acres of an environmental geomembrane on Rochford Fields and 3 acres of a marker barrier of geotextile on Villano Park.  After the environmental work was complete we constructed over 4,000 lf of concrete and brick veneer retaining walls with architectural precast concrete caps that basically run the perimeter of each park.

Rochford Field consists of a Collegiate Level Baseball Field, a Little League Field and soccer field.  A 360 person covered seating grandstand was constructed along with a ticket booth and press box for the baseball games.  The sod field is fully irrigated and has a walking/running track around the perimeter of the fields for pedestrian use.  We installed benches, solar powered self-compacting trash receptacles, drinking fountains, dug out structures, ornamental picket fence and gates and is handicapped accessible.  We installed 10 deep sport field lighting foundation bases along with all electrical conduit for a future Musco LED Sport Lighting System to accommodate some night baseball games.

Villano Park was constructed with two new lighted tennis courts and two lighted basketball courts.  There is a fantastic 5-12 year old playground consisting of a rope maze climbing gym.  Next to it is the 2-5 year old playground that includes a climbing gym along with musical drums, chimes, xylophone and other play equipment.  Both playgrounds are covered with a soft poured in place rubber safety surface.  Adjacent to the playgrounds is a beautiful splash pad/water park with 17 different spray features, some of which spray out of the ground or from overhead structures such as giant flowers and butterflies.  Villano Park also features 4 different picnic shelters and a curved trellis shade structure designed for vines to grow on and provide cover.  The trellis has 4 concrete chess tables and numerous benches for people to sit.  The main feature of Villano Park is the Performance Stage located in the middle of the park.  This is a covered structure designed for musical performances and such.  There are numerous sidewalks on the park some of which include permeable pavers that allow rain water to discharge back into the ground.  The entire park has a state of the art LED lighting system for both pedestrian lights and sports lighting.  Villano Park also features extensive landscaping including many trees and bushes all of which are watered by a full irrigation system.

Guerrera performed all of the site work on this project over a 3 year time frame for Fusco Corporation who was the Construction Manager.  The project consisted of a $75 million dollar renovation of the existing school as well as site work for several new additions.  Upgraded infrastructure included water, sewer, storm, gas and electrical services.  This was a complex project due to the seven stages of construction in order to keep the school open and safe for the students and administration.  In addition to the structure excavation and utility work we also created new parking lots, lawns, site lighting, sidewalks and courtyards.  Working around existing live utilities that were installed in the 1950’s was a challenge but we were successful in managing this work safely and without interruption to the school.  We had to create temporary egress sidewalks and walkways to the school in order to maintain safe passage for students during phased construction.  As part of the site work, we also built a brand new sod football/soccer field, baseball field and softball field all of which have full irrigation.  This includes a 200 seat grandstand, new scoreboards, fencing, running/walking track and the site work for a new field house. 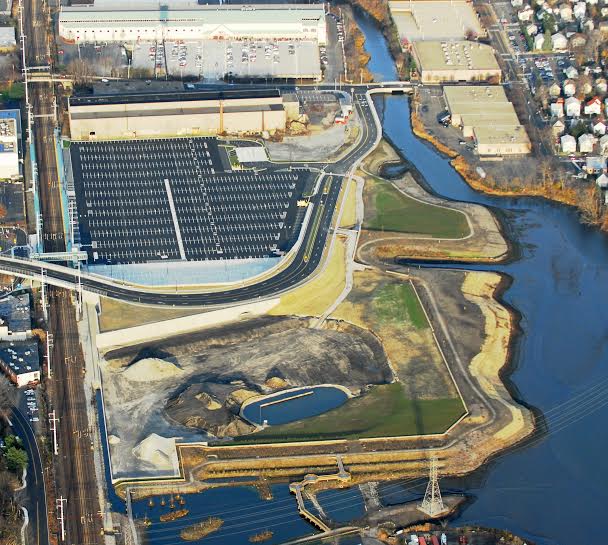 This was a high profile project for the Town of Fairfield because it included building a 1,500 car parking lot for the Town’s new Third Train Station. This $25 million dollar project included environmental restoration of an existing 35 acre Brownfield Site that was the site of a former machine manufacturer. Some of the project highlights included the restoration of 2,500 lf of coastal shoreline, installing over 2,000 lf of 36” and 24” sewer main, Blasting over 100,000 cy of rock, Excavating over 175,000 cy of earth, installing 110’ of 36’ wide precast concrete arch tunnel, installing over 120,000 sy of impervious polyethylene geomembrane liner, installing over 2,500 cy of cast-in-place concrete retaining walls and the creation of a 1,500 car parking lot. This project was completed within 18 months and showcased Guerrera’s ability to handle a large project encompassing many different types of work in a tight schedule.

The project included the restoration of a pedestrian bridge over the Naugatuck River and the construction of a pedestrian trail along Rt. 8. Work included demolition and construction of new retaining walls, granite curbs, brick pavers, concrete sidewalks, asphalt paving, landscaping, fencing and site lighting. Access to the site was very limited and included closing a Rt. 8 on ramp for 6 weeks in order to allow access to part of the site. We finished the project on time and are proud to be part of this project that created a safe pedestrian trail.

We worked for South Central Regional Water Company on this project and it included the installation of over 11,000 lf of 30” ductile iron water main pipe. The majority of the pipe was installed in a State Road and had to be done within restricted working hours of the day. The work included wet tapping an existing 48” cast iron water main to tie in the new 30” water main, construction of a pressure reducing facility, temporary bypass of existing water main, connecting 28 new service laterals, temporary asphalt trench patching daily and full depth road reconstruction of all disturbed areas at completion of project.

This project for the Town of Hamden involved installing 105 lf of 10’ x 14’ precast concrete box culvert that is acting as a pedestrian tunnel for the Farmington Canal Rail to Trail Project. The Town allowed the road to be closed for 14 days for the installation of the tunnel and all restoration and paving of Skiff Street Roadway above the tunnel. The project involved extensive support of existing utilities in the road and a creative solution for installing the box culvert under the utilities and existing overhead utility lines which made the use of a crane impossible to set the boxes. Guerrera engineered a solution to the problem and was able to perform all of the work in the allowable time frame and with safety as a top priority.

The project included the demolition of the existing cast-in-place concrete arch bridge over the Saugatuck River, road realignment and the construction of a new precast arch bridge. We had to engineer a substructure platform that would allow for the demolition of the old bridge without getting any material into the river. It also had to allow for the construction of the new bridge and act as a safety platform for workers. This was extremely challenging due to the limited working room and the nature of the steep terrain around the jobsite. Our experienced operators and laborers overcame the tough working conditions and performed the demolition and new bridge construction without any safety incidents. This is a testament to the professional, hard working employees that we are fortunate to have at Guerrera Construction.